I have previously owned two Eriba models the 120gt and latterly a 320gt bought from new in 2012, and sold before buying the Go Pod in March 2017. Both Eriba models were good, but for my personal use the Go Pod is a more comfortable and usable option. 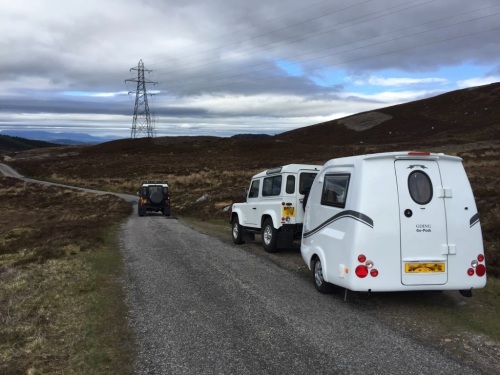 If we consider tow-ability, the Go Pod, is a dream compared to both the Eriba models, specially the 320gt, which is actually quite a heavy caravan for the space offered, for example towing the Go Pod I see no difference in my MPG, whereas with the Eriba 320gt it dropped by about 12%. The biggest difference is the stability when towing, even in windy conditions the Go Pod is rock solid. Also because the bed in the 320gt, is sideways it is just that bit wider and with most cars would require mirror extensions, whereas the Go Pod in my case does not require anything other than the normal mirrors.

Internal layouts next, the bed in the 320gt is comfortable, but making it up at night is a bit of a pest, specially stowing the rather large table, which can really only be stacked against the door this cuts down the usable space to no more than offered in the Go Pod. The bed make up on the Go Pod is so simple with the built in slats, it is comfortable and deceptively large.

The table in the Eriba is large and if you are planning a meal for four that would be fine, in my opinion it is a bit too bulky. The Go Pod offers a choice of table size my personal preference is for the smaller one, but both are very functional.

Seating, both the Eriba and the Go Pod have restricted depth on the seats, but with the new thinner backrests on the Go Pod this has been addressed. The big benefit is that in the Go Pod you can stretch out full length on the seat, which is impossible in the Eriba, this makes the Go Pod a clear winner for taking a break on a long journey.

The Eriba 320gt, does have a toilet which is nice but in reality it is very cramped and do you really need two sinks in a small tourer? In reality the toilet as I see it is for emergencies and the Fiamma unit in the Go Pod is perfectly adequate.

The cookers in both are very usable so not much to say there, but the top loader fridge in the Go Pod is the outright winner, I was sceptical when I first used it, but from a practical perspective it is fantastic, in both in capacity and function. I can pack all my provisions in it before leaving and they arrive as the departed, I never packed provisions the fridge in the Eriba when I was traveling as everything would rattle about so I had to use a cool box in the car when traveling.

Heating in the Eriba is restricted to gas or a stand alone supplementary heater, with the Go Pod Plus the Whale dual gas or electric heater has proved to be excellent, and quiet on the low setting so that it is almost inaudible through the night. The Go Pod definitely feels much more comfortable and warmer than either of the Eriba models.

Storage was a pleasant surprise, I had feared that the Go Pod may be lacking compared to the 320gt, but to my amazement, everything I had in the Eriba fitted in the Go Pod with space to spare, the under seat storage is much easier to access, and I still have unused space.

The LED lighting and fittings on the Go Pod is far superior to the Eriba, and give a wider selection of settings, both have two 13amp sockets. The built in TV arial amplifier and solar panel on the Go Pod are not available on the Eriba, the latter gives the Go Pod usable off-grid capability.

Overall for what I want from a small caravan, the Go Pod Plus has ticked every box.